Talking to delegates and civil society stakeholders here at the 18th Commission for Sustainable Development (CSD18) at the UN’s New York HQ, there is a palpable sense that not enough has been done since the first Rio Earth Summit in 1992. It’s a very real frustration, not only with the inability to turn solemn words in to meaningful change over the last 18 years, but also at the continuing inertia at the heart of many of the national positions. Perhaps it’s still a nasty hangover from the mess in Copenhagen, but there appears to be little hope and a fair dose of helplessness in the corridors.

But get under the veneer of the pessimism and there are some excellent exceptions. There have been some great presentations on work done by theNordic Council on eco-labelling, the EU's Switch-Asia programme and theVirtual Schools of Sustainable Consumption out of Mexico. But these are not the norm, merely the vanguard. It’s the work of civil society, not least the NGO community – facilitated here by SDIN , of which Consumers International is a key member – to push governments to embrace these successes, redouble their investment in them, and return to the visionary politics that created the World Summit on Sustainable Development almost two decades ago.


CI’s role and that of the other civil society groups here at CSD18 is clear; keep this process moving, keep it constructive and do our bit to ensure Rio 2012 becomes the moment world leaders finally find the voice (and the guts) to implement real sustainable consumption and production policies. As one delegate put it to me, “its time to reboot Rio”.

CI’s Bjarne Pedersen posed the question in Outreach early this week “can we get governments over the starting line of meaningful policy at CSD18?” the answer as we come out of the last session is 'yes, we could'. CSD19 next year will apply the findings of this year's review and turn them into policy. The Chair's final summary statement has included some encouraging key points, not least the importance of formalising the role of the Marrakech Process. Some countries will still try to block this, but this is a positive step. 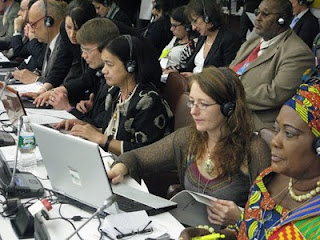 Final drafting of final statements on the last day of CSD18

So we now turn our attention from the annual CSD negotiations to the preparatory work for Rio 2012 – this is the first real opportunity for stakeholders to share ideas about what needs to happen at the third Earth Summit . CI will be at the centre of this, through our involvement in the Marrakech Process, the International Advisory Board of the Stakeholder Forum,and the Green Economy Coalition. We’ll obviously be pushing sustainable consumption in general terms, but we’ll also be keeping a close eye on how corporate accountably is developing in this process – a crucial element of successful sustainable consumption and production.

So, despite the down-heartedness in some quarters and the continued intransigence in others; there’s some great ideas and inspirational energy still in the can. The fight goes on.