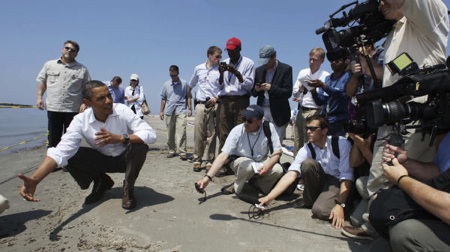 Day 40. Great gouts of oil still rush from the ruptured BP well at the bottom of the Gulf of Mexico. A frustrated president visits the scene of the disaster to literally dab his finger at a tar ball washed up on the Louisiana beach. Television news, enlivened by easy-to-get pictures, sets its stand-ups in strategic positions, broadcasting the drama of competition between spreading pollution and technological limits to a nation that clucks about the damage and still races down the highway in 18 mpg SUVs.

It's convenient to compare Obama's Gulf crisis to Bush's Katrina crisis. Same region. Same antecedent: a nation devoted to oil and so 'shocked' when the consequences of its use produce a calamity.

Arguably, though, a more apt simile is Carter's hostage crisis. The day-after-day countdown of quavering orders and quashed expectations. The grim Democratic president schooled by surprises and anxious to project managerial competence over details he has surprisingly little capacity to manage. And everybody involved -- the company, the administration, the region, the nation -- acknowledging the magnitude of the event but exhibiting no appetite for changing the rules of the game that would steadily reduce the need for dangerous deep-sea oil exploration and development.

How will America react after BP's undersea oil geyser is stopped? Maybe they'll make a change in the White House. But they also have exhibited fierce resolve to secure what they have - cars, homes, choices, and mobility.

That means exploring for more oil or penetrating even deeper into the cultures and economies of other nations to acquire it. In 2009, according to the most recent figures from the Energy Information Administration, the U.S. consumed 18.7 million b...

Those same polls find a decline in the sense of American urgency about climate change. Only a third of those polled in a Pew survey released on May 19 said it was very important for Congress to address climate change. And with gasoline selling at under $3 a gallon for most of the last two years -- it was $2.60/gallon in Muskegon, Michigan on Friday -- Americans aren't stressing nearly as much about prices.

President Obama is smart enough to know that the Gulf catastrophe is momentous. He's apparently unsure about what precisely the moment demands. That's why although last week he took the first step to explicitly link the need to pass a comprehensive climate and energy bill to the largest oil spi..., he wasn't that enthusiastic.

On Tuesday, Obama met with Senate Republicans and, according to a White House statement, told them “that the gulf oil disaster should heighten our sense of urgency to hasten the development of new, clean energy sources that will promote energy independence and good-paying American jobs. And he asked that they work with him on the promising proposals currently before Congress. “

The next day Obama toured Solyndra’s solar thin-film manufacturing plant in Fremont, California and noted that even as “we are dealing with this immediate crisis, we’ve got to remember that the risks our current dependence on oil holds for our environment and our coastal communities is not the only cost involved in our dependence on these fossil fuels. Around the world, from China to Germany, our competitors are waging a historic effort to lead in developing new energy technologies.”

The climate action and clean energy communities have been pushing the White House for weeks to leverage the oil spill as an event that could remind Americans of the seriou..., and galvanize political support for comprehensive legislation. Of all the options available to the president, really pushing for legislation that pushes the nation's energy industry to address the markets and threats of the 21st century makes the most sense. It's just the sort of big step out of the mainstream of conventional Washington thinking at a time of crisis that could help Obama really close the deal on his campaign promise of doing just that.

The American Power Act, introduced in the Senate earlier this month takes into account public support for off... -- and provides developers access to new areas for offshore exploration. The proposal, though, also includes a range of other measures to spur clean energy develo... for polluting and dangerous fossil fuels.

As a candidate in 2008 and as president Obama has made it a point o... while also instituting the energy efficiency and emissions reduction regulations to respond to climate change and support new markets. The dual initiatives – public investment in clean energy tools and federal regulatory action -- form the administration’s primary industrial development and climate action strategy. Just how powerful that combination is in generating jobs and new industrialization is now emerging in Michigan, where roughly $6 billion has been invested over the last year in new battery manu...

With so many Americans calling on the president to do something about the Gulf mess, just not something that causes too much change, Obama’s next big move seems obvious. Press the Senate hard to pass climate and energy legislation. The bill is another factor in pushing the country in the right direction.