Carbon Army is in full swing now and from Tuesday December 1 our army of volunteers will be on the march. Check out our regional map for great opportunites near you at www.btcv.org/carbonarmy

Ed Miliband, Secretary of State for Energy and Climate Change, has already signed up for BTCV's Carbon Army and ahead of his crunch trip to Copenhagen, he's offered to volunteer with… Continue

BTCV launched its Carbon Army campaign yesterday in London and what a wonderful day. The event was exceptionally well attended and the media interest has been good. Celebrity gardener Charlie Dimmock helped us launch the campaign along with Nick Herbert MP, Shadow Defra Minister.
We launched at a Green Flag status park in Highgate and outside a team of 26 volunteers - our first Carbon Army recruits - dug and planted a kitchen garden. The idea was to show how simple it is to plant herbs and… Continue

Obama going to Copenhagen, but what will he bring back?

Six Tools You Need for Climate Change Art (and Action) 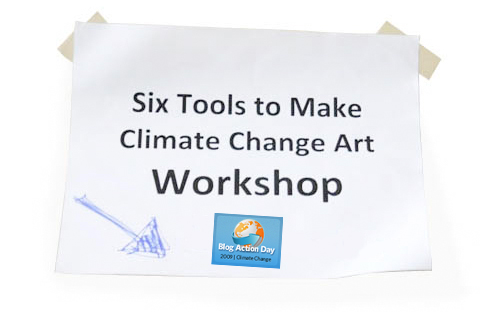 
Six tools for Climate Change Art? What's that about? Many people reading this -- maybe even you -- will claim, "I'm not an artist or an activist. I can't even draw a straight line... How can I make climate change art?"…

Climate Change and its Effect on Wildlife

The effects of Climate Change will probably be disasterous for millions, and most of us in the CCMP know that. Moreover, many species of animal do not have the ability to speak up for themselves on this or any of the inter related issues. Certain interested journalists must do it for them.

With the burgeoning human population, and its need to push back the barriers of wilderness areas that are many animals habitat and refuge, humans are taking up every possible space to housing,… Continue

Working in a coalition of roughly 500 organizations from nearly 80 countries can be tough. With so many different points of view and unique perspectives and expertise, coming to agreement on something as complex as solving climate change can be difficult to say the least. But then again, isn’t that what we’re asking over 180 countries to do next month in Copenhagen?

Well, I’m happy to say that at least as far as the Climate Action… Continue

Your Carbon Army Needs You

Why not take part in one of BTCV's Carbon Army events? On December 1 and 2 our Carbon Army will be undertaking woodland management at Bulcote, Nottinghamshire, England.

It's one of our 3000 days of action during December to tie in with the UN Climate Change conference in Copenhagen - one action day for every delegate.

Once trees have been planted and established themselves it's important to care for them to ensure they reach their full potential. This includes making sure… Continue

UNITED NATIONS, Nov 19 (Reuters) - The U.N. environmental chief called on rich nations on Thursday to pledge $10 billion a year for three years at next month's Copenhagen summit to help poor states begin to tackle the impact of climate change.

Yvo de Boer, head of the U.N. Climate Change Secretariat, told a news conference that was a short-term figure and that in 10 or 20 years hundreds of billions of dollars would be needed annually to cope with global… Continue

BAN TO FOCUS ON CLIMATE CHANGE DURING TRINIDAD AND TOBAGO VISIT

New York, Nov 19 2009 - Secretary-General Ban Ki-moon is hoping to boost momentum for December’s climate change conference in Copenhagen when he meets with political leaders at the biennial Commonwealth Heads of Government Meeting in Trinidad and Tobago next Friday, his spokesperson said today.

“The Secretary-General expects to focus the attention of these leaders on key issues that require their engagement in the climate change negotiations, in particular, concerning mitigation and… Continue

BRECKENRIDGE, Colo. (AP) — Ski officials at one of the nation's most-visited resorts are calling on Congress to finish work on a climate-change bill.

Summit County officials joined representatives from the Breckenridge Ski Resort for a slopeside announcement Wednesday calling on the U.S. Senate to pass a climate change bill.

The House has voted to create a cap-and-trade system to reduce carbon emissions. The measure is still pending in the Senate.

Cuba Asks FAO to Include Climate Change in Its Agenda

HAVANA, Cuba, Nov 19 (acn) Cuba recommended the inclusion in the agenda of the United Nations Food and Agriculture Organization (FAO) of the systematic assessment and warning about the effects of climate change.

The recommendation was made by the VP of the Cuban Council of Ministers and Agriculture Minister Ulises Rosales del Toro in a round table discussion that took place on Wednesday during the last day of a UN summit on food security that concluded in Rome,… Continue

Saving forests and those living in them

The benefits of forests such as carbon storage, reduced flooding and soil erosion, and the provision of food and jobs should be protected in a new climate change treaty, researchers say.

Safeguards for these ecosystem services, which would be part of an agreement to pay countries to protect their forests, would also guarantee the rights of forest-dwellers and cut global carbon emissions, their study says.

The paper, by Dr Chuks Okereke of Oxford’s Smith School of… Continue

COP15 for journalists: a guide to the UN climate change summit

IIED has today published a four-page briefing paper for journalists about the COP15 climate change summit that will take place in Copenhagen in December.

This briefing covers COP15, its build up and its aftermath. It explains key processes, major actions to be agreed and possible outcomes.

It has been reviewed by three international lawyers who sit on national delegations during UN negotiations.

It covers things like:
• The future of the Kyoto Protocol – do… Continue

LEGAZPI CITY: The emerging climate change phenomenon threatens the Philippines’ vital agricultural crops and natural resources, a Japanese scientist told the International Conference on Climate Change Adaptation Science and Technology here. A pool of scientists from various state universities throughout the country convened in this city through the initiative of… Continue

Philippines: Mining emits greenhouse gases
Conference on climate change to discuss its risks and potential impact to the country

Mining industries are a major source of greenhouse gases which pollute the environment, as Gilbert Gonzales, regional director of the Environment Management Bureau (EMB) of the Department of Environment and Natural Resources in Bicol… Continue

Global warming to cause famine in RP by 2020

Global warming to cause famine in RP by 2020

LEGAZPI CITY: Scientists warned the Philippines could experience famine by 2020, as the adverse impact of global warming takes its toll on natural resources.

One of those scientists was Lourdes Tibig, climate data chief of the central office of the national weather agency, the Philippine Atmospheric, Geophysical and Astronomical Services… Continue

Ms. Earth 2004 Priscilla Mereilles and her court set foot on this historical island to plant pili seedling in Barangay Misibis at the wide stretch of white sand girding… Continue

LEGAZPI CITY—As the world faces serious food and other environmental problems, young scientists from six countries called on world leaders to get their acts together to counter carbon dioxide emission and lessen the impact of climate change.

The world is headed to irreversible and catastrophic changes if global warming results in an average rise in temperatures of more than 2 degrees Celsius, Europe’s top envoy warned yesterday.